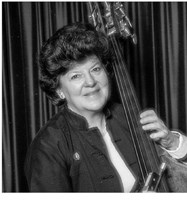 Before there was an OCSM or a Symphony Six, there was a school orchestra in Winnipeg with a problem. “The person who was playing the bass either broke his leg or his arm on the football field,” recalls Ruth Budd, who was a 16-year-old violinist at the time. “The conductor said, ‘Who would volunteer?’ and I said I would! He said, ‘Don’t be silly. You know a girl couldn’t play the bass.’”

This was in the early 1940s, and another sort of person might have believed it to be true or just accepted it as the way of the world. Not Ruth Budd: “I played a violin, and I knew that the strings were just backwards, and I thought, ‘Well, if I just think in negatives, I should be able to do this.’ So I practiced by myself. We entered the festival and won our class. The adjudicator made some comment about it being the first time he’d ever seen a girl playing the bass. Well, I really liked it!”

That was the beginning of an incredible symphonic career for Ruth, which included major contributions to all Canadian orchestras. Over the course of five decades, Ruth became the first female professional bass player in Canada, joining the Toronto Symphony in 1947. She left the TSO in 1952, a casualty of the infamous “Symphony Six” scandal. She then played in the Halifax Symphony and other orchestras before returning to the Toronto Symphony in the mid-1960s. She founded OCSM, together with like-minded colleagues, in the early 1970s. I recently spoke with Ruth by phone, from her home at a seniors’ residence in Toronto. At 89, she speaks with precision and charm, filling her stories and recollections with great warmth.

I first asked Ruth how the Symphony Six scandal came about. “The orchestra had not done much touring, but Ernest [MacMillan, the TSO’s music director] really wanted to. At that time we did not have many guest conductors, neither did we go anywhere very much, if at all.

“I was in the TSO for five years before the McCarthy era really struck and before the opportunities came along for the Symphony to go somewhere. When the invitation came to travel to Detroit for one concert, I think the conductor and the management probably thought this was a glorious opportunity to spread the wonders of the Toronto Symphony! And unless you can fulfill your contract, then you’re out.”

Ruth, of course, was one of those who could not. The six players were denied visas by the U.S. State Department, under suspicion of leftist activities. “The McCarthy era was a terrible time, when nobody had to prove anything. You had only to be suspected of left leaning and that was enough. As I was walking past the women’s dressing room, I heard one of my colleagues say, ‘Well, she reads a lot so she must be a communist.’ And so on!”

Very little united the six musicians. One was a book lover, another had played in Ukrainian cultural centres: that was Steven Staryk, just 23 at the time, who would later return as the TSO’s concertmaster. Three of the Symphony Six, oddly enough, were bass players.

The story exploded in the papers for weeks, and some members of the TSO board quit in protest. But neither the union nor their fellow musicians did much to support the non-renewed musicians. “They didn’t want to, they were too frightened,” says Ruth. “People were so terrified of losing their jobs that they actually crossed the street in order not to talk to us. One was condemned by association. It was a pretty scary time.”

The dark chapter ends rather quickly though, in Ruth’s telling. “I was very quickly hired to play at one of the local theatres, and I loved it. Here I got a chance to hear and see the great theatre people. I was still aware of the political situation, but I didn’t feel I could do too much about it.”

While she was playing in the theatre, Ruth was also starting a family. “Concerts started at 8, so I could put my kids to bed at 7:30 and go toddling down to the theatre, because I didn’t live that far away. Well it wasn’t wonderful music, but I love theatre and that theatre, the Royal Alex, was great. I also got an awful lot of mending done in the pit.”

I asked Ruth, was mending a hobby she enjoyed? “No, I hated mending. But my kids needed socks and I didn’t have the money to buy them. So I did a lot of fixing down there in the pit.”

Ruth describes with delight how her father altered his car to accommodate her bass: "He cut this door out in the back of the car, and he put a little handle on it, so he could get the bass in the back of the car. I’m pretty sure there wasn’t another one like it; it may have been the first hatchback in Toronto, or in Canada! And he was a portrait photographer, not a metal worker."

That same spirit of resourcefulness wedded to necessity led Ruth into orchestral activism. She joined the Halifax Symphony in 1958, and found conditions there were appalling. “We needed to have enough light. We needed to have enough warmth so that the oboes wouldn’t crack. We needed to make sure that we could see the music, and that it was printed well instead of reading chicken marks, you know? Things just as simple as that.

"And I’m the kind of person who has a pretty good time wherever I go. I tend to say, ‘Well, how can we make it better?’ That’s just my personality. So I loved being in Halifax and we made some wonderful friends.”

In 1960, Ruth returned to Toronto to perform with the Hart House Orchestra, a celebrated chamber orchestra founded by Boyd Neel, which premiered many new works by Canadian composers. Toronto Symphony music director Walter Susskind heard her play there, and asked her to rejoin the TSO bass section in 1964.

The TSO was a member of the International Conference of Symphony and Opera Musicians (ICSOM), founded in 1962 – another international member was the Montreal Symphony. In the late 60s, Ruth began talking about forming a new, Canadian symphonic player conference: “It seemed to me really important to do that. Because we belonged to the American Federation of Musicians, ICSOM was relevant to the American law. It was not relevant to Canadian law. And we weren’t used to standing up on our own two feet and saying, ‘We can do this. We have another country, we need laws that are relevant to us.’

“And so, in about 1970, I went across the country during my summer holidays. I made contacts in advance and stopped in various cities where there were orchestras. I took the train across the country, which was a wonderful thing to do; I wasn’t in a hurry. I stopped in places like Winnipeg, Saskatoon, Edmonton, Calgary, and Vancouver, and talked to people about the possibili- ty of starting a Canadian group called OCSM. Well, we weren’t sure what we were going to call it, but we thought OCSM would be good.”

The next fall, Ruth and her Canadian symphonic colleagues met for the first time in St. Catharines, even though they had to get permission from their orchestras to attend. “There was a little bit of fear, you know, you never know what you’re doing. And I’ll never forget the sort of fear from the union itself. They thought we were trying to break away! Our meeting was concurrent with the Canadian Conference, and I remember they were sort of pacing up and down and they wanted to know what we were talking about. But we weren’t ready to give a report. And there really wasn’t anything subversive, truly! We were trying to figure out how to make it work better for the Symphonic musicians. We wanted it to become an arm of the union, and to have a fraternal relationship with ICSOM.

I asked Ruth her advice, for those going through tough negotiations today. “We all want the music, so our goal is the same: to have the best orchestra possible within the means of the city. That’s one of my great lines: You want the best orchestra, so do I. In other words, instead of building barriers, break them down. Ultimately that’s what you want, the best possible orchestra in that city. How do you get it? How do you attract really good musicians? Offer a really good package. Then we’ll all have what we want.”

Also, find a hobby - preferably something “that you can touch and feel and hold, or eat,” she suggests. “I used to go downstairs where I had a potter’s wheel and a kiln in the basement of my little house, and it was wonderful to work after a concert. If I hated the concert I could come back to joy by creating a pot out of clay, and if I loved the concert, well, that too. I could just work on the pot and love it.”

As positively energized as Ruth gets in recounting her memories, she’s just as enthused about her current projects. These include directing a choir of her fellow seniors at Christie Gardens. (As she firmly points out, she does not conduct.) “We’re thirty-some people and we started out singing ‘Frère Jacques’ and I would say now, we do a reasonably respectable Hallelujah Chorus.” No matter the place or the time, it seems, Ruth Budd finds a way to organize and make music.

For more about the “Symphony Six”, see "Historicist: The Symphony Six" by Kevin Plummer, posted in Torontoist.